How a gay California lawmaker and the former head of the National Association of Evangelicals found common ground on a controversial piece of legislation. 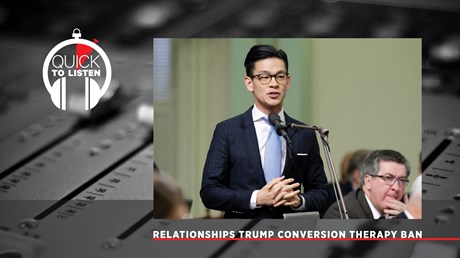 This spring, California assemblyman Evan Low introduced legislation that would have designated paid “conversion therapy” services as a fraudulent business practice. Until last week, Low’s measure seemed set to pass. It moved through both of California’s legislative chambers and governor Jerry Brown had shown no sign of opposition.

But last Friday, Low quashed his own legislation after meeting with Christian leaders who had expressed concerns about how the bill might affect their ability to minister to those in the LGBT community.

“Some would say this is crazy,” Low, who is gay and the chairman of the legislative LGBTQ caucus, told The Los Angeles Times. “Why would you pause when you don’t need to, when you’re in the driver’s seat?”

One answer was Low’s relationship with Kevin Mannoia, the former president of the National Association of Evangelicals and a leader in the Free Methodist Church.

Over the course of the summer, Mannoia met with and developed a relationship with Low. Last week, Mannoia wrote an op-ed for The Orange County Registerexpressing his opposition to the bill—and to reparative therapy. Low dropped the bill the next day.

In his years working as an evangelical leader, Mannoia has learned to build relationships with those with whom he may disagree. So what does it take?

“Being willing to commit to them as people … and what we believe to be right and appropriate in reflecting Christ well,” said Mannoia. “Not primarily driven by the political agenda, nor even the possibility that we may be used or manipulated, but simply doing what is right because it’s right.”