A Great and Terrible Nation

Understanding our history, and how that might frame our Fourth of July prayers. 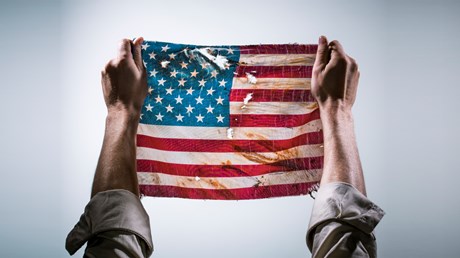 Many Christians want to believe that America is a Christian nation, and for the best of reasons. Many of the early founders were devout Christians. Much of America’s history has been shaped by Protestant and evangelical values. God has indeed blessed the nation with extraordinary natural resources and bold and courageous people. It has been and continues to be a land of opportunity, which is why so many across the world want to come here. And its Declaration of Independence and Constitution are grounded in the ideal of liberty as espoused by no other nation in history.

It is no wonder, then, that many feel America has been chosen by God. It’s not surprising that many Christians join the words God and country, and that others think of the Bill of Rights as divinely inspired—“nearly as important as the Resurrection,” as one patriot put it to me recently. One might infer idolatry here, and to be sure, some Christians go too far in this direction. But let us be charitable and assume that my friend, in hyperbolic fashion, was suggesting that something about the American experiment is a miracle.

But by no means is America a Christian nation. It is certainly not in any formal sense. That is, there is nothing in our Constitution that makes that assertion. Zambia has declared itself a Christian nation, as have Denmark and Costa Rica and a few others. But we have not.

It is often said that our founding leaders were mostly Christians and they shaped the nation to that end, if not formally. This is patently untrue. While some were devout Christians, others were deists (like George Washington), and some were hostile to orthodox Christianity (like Thomas Jefferson). To be sure, they crafted our founding documents …