About That Evangelical Summit in Wheaton This Week

Home » News » About That Evangelical Summit in Wheaton This Week

And why conferences are such an enduring and crucial part of the movement. 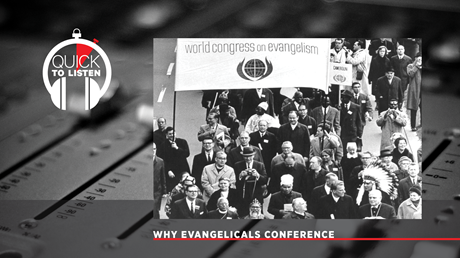 Several dozen evangelical leaders from across the country gathered at Wheaton College on Monday and Tuesday this week. In anticipation of the event, The Washington Post teased the meeting: “Dozens of evangelical leaders meet to discuss how Trump era has unleashed ‘grotesque caricature’ of their faith.”

But the meeting turned out not to be a giant pilgrimage opposing Trump.

“No, absolutely not,” said Harold Smith, Christianity Today’s president and CEO, who attended the summit.

“It was like a neighborhood gathering that got some press attention as people were expecting something bigger than ever this meeting had hoped to be,” said Ted Olsen, CT’s editorial director, who also attended. “This was like a large luncheon more than anything else.”

Yet both men acknowledge that summits and conferences have played a critical role in the evangelical movement. Olsen and Smith joined associate digital media producer Morgan Lee on Quick to Listen this week to discuss how conferences can help different generations of the church better hear each other, the extent to which conferences affirm versus challenge their audiences, and the role that advances in international travel have played in Christians getting together from around the globe.

Quick to Listen is produced by Morgan Lee, Richard Clark, and Cray Allred