Al Mohler: The Humiliation of the Southern Baptist Convention

Evangelicals, we can no longer say sexual misconduct is just a Roman Catholic problem. 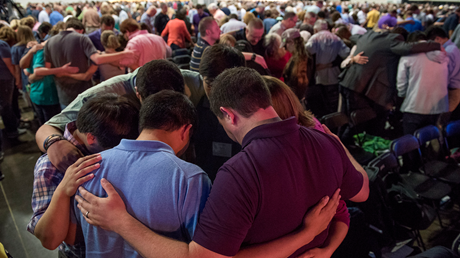 The last few weeks have been excruciating for the Southern Baptist Convention and for the larger evangelical movement. It is as if bombs are dropping and God alone knows how many will fall and where they will land.

America’s largest evangelical denomination has been in the headlines day after day. The SBC is in the midst of its own horrifying #MeToo moment.

At one of our seminaries, controversy has centered on a president (now former president) whose sermon illustration from years ago included advice that a battered wife remain in the home and the marriage in hope of the conversion of her abusive husband. Other comments represented the objectification of a teenage girl. The issues only grew more urgent with the sense that the dated statements represented ongoing advice and counsel.

But the issues are far deeper and wider.

Sexual misconduct is as old as sin, but the avalanche of sexual misconduct that has come to light in recent weeks is almost too much to bear. These grievous revelations of sin have occurred in churches, in denominational ministries, and even in our seminaries.

We thought this was a Roman Catholic problem. The unbiblical requirement of priestly celibacy and the organized conspiracy of silence within the hierarchy helped to explain the cesspool of child sex abuse that has robbed the Roman Catholic Church of so much of its moral authority.

When people said that evangelicals had a similar crisis coming, it didn’t seem plausible—even to me. I have been president of the Southern Baptist Theological Seminary for 25 years. I did not see this coming.

I was wrong. The judgment of God has come.

Judgment has now come to the house of the Southern Baptist Convention. The terrible swift sword of public humiliation …