Billy Graham kept the focus on God at all times. How did he do it? 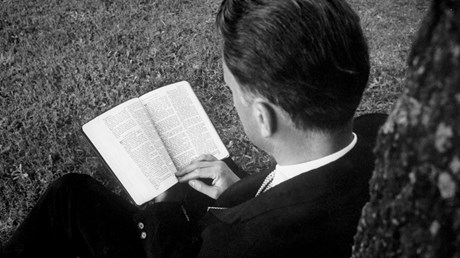 Future historians will find more than enough material from Billy Graham's life and work to keep them occupied. But one of the main questions they will want to answer is: What was the secret of his success?

One vital component will probably elude most of them: Graham's deep commitment to a consistent, thoughtful devotional life. Without it, Graham never would have become the person he was, nor would he have had the worldwide impact he did. It kept him humble, reinforced his integrity, expanded his vision, and enabled him to keep his focus. Most of all, as he often said, it kept him close to the One he sought to serve.

The elements of Graham's devotional life were simple: the Bible, prayer, and reflection. In his view, each was essential and bound to the others. Graham learned early on the value of setting aside a definite time each day (preferably in the early morning) to be alone with God, a practice he sought to maintain even in the midst of overwhelming pressures, disruptions, and frequent travel.

Graham believed that his time at Florida Bible Institute was the most important period of his life in terms of his spiritual growth. The significance of daily quiet time was reinforced there as he learned what it meant to study the Bible systematically and thoughtfully, and the experience shaped his life in profound ways.

His relationships with his teachers and fellow students from Florida Bible and Wheaton colleges also helped shape his mind and soul throughout his life. One of his most significant personal qualities was his willingness (even eagerness) to interact with men and women whose education or experience might help him expand his horizons—from his wife, Ruth, and her father, L. Nelson …