The cathedral’s famous Gothic form, which proclaimed Christ in shape and structure, will never die. 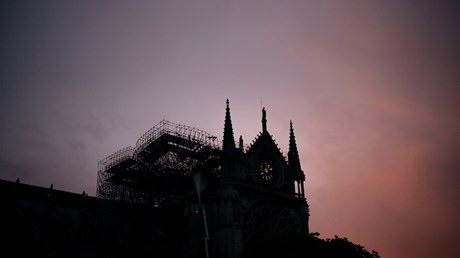 Gothic architecture has long reached where Christian missionaries would go but are not permitted: the minds and hearts of the faithless. The world’s grief over the flames at Notre-Dame de Paris revealed its power as far more than architectural style.

For the great medieval commentator William Durandus (d. 1296), the Gothic church took the shape of Christ’s body: the chancel the head, the transepts the arms, the altar the heart. And if the Gothic church symbolizes the body of Christ, to see Notre Dame burn this Monday was to experience Good Friday early.

It was excruciating to watch its spire fall. But at the risk of saying this too soon, the Gothic style represented by Notre-Dame de Paris cannot be stopped by fire. This style has given the church a theology of glass and stone, a model that has spread to Catholic and Protestant structures across the centuries and around the world.

Fifty miles from Paris, the greatest and most complete of Gothic cathedrals, Chartres, was itself born of fire, built and rebuilt after blazes in 1020, 1134, and 1194. It is no different with the delicate stonework of Reims, France’s great coronation cathedral—the result of a fire in 1208. Gothic architecture, like the art of pottery, does quite well with flames.

The Gothic style first emerged in the mid-12th century at the Royal Abbey of Saint-Denis just north of Paris. Abbot Suger’s innovation there was the equivalent, the art historian Erwin Panofsky once commented, of a new president remaking the White House in the style of Frank Lloyd Wright. And his bold architectural risk paid off.

The plain evidence for Gothic’s theological and liturgical inspiration is unavoidable. Over the door of Saint-Denis, Abbot Suger …