Taraji P. Henson says her faith influenced her decision to play Ann Atwater, the Christian woman who got the head of the Ku Klux Klan to consider integrating Durham schools. 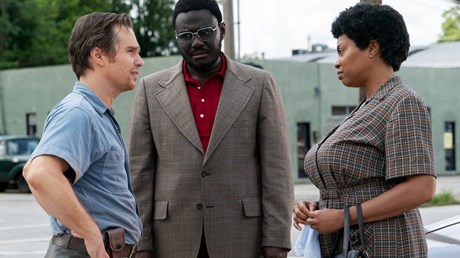 Oh absolutely,” Taraji P. Henson told Christianity Today when we asked if her faith in God informs her choice of roles as an actress and influenced her to take on the challenge of playing Ann Atwater in Best of Enemies. “I look for projects that are going to transform people … and spark intelligent conversation.”

For Henson, it is especially important to look for films that will “push envelopes [in a way to] make you want to do something good to change a bad situation.”

It is no surprise, given these sentiments, that Henson was enthusiastic about playing civil rights activist Ann Atwater in this historical drama about the integration of Durham, North Carolina, schools in 1971. What may surprise audiences of Best of Enemies is not how much it praises Atwater but how hard it strives to humanize and complicate her antagonist, Ku Klux Klan leader Claiborne Paul (C. P.) Ellis, played by Sam Rockwell.

Scriptwriter and director Robin Bissell echoed Henson’s assertion that the film is more about personal transformation than about institutional changes. Bissell states that as a white male he was not sure he would be the best person to represent the depth and scope of the violence of the Klan toward African Americans. Consequently, he tried to focus the story more narrowly on how Ellis was able to “breakthrough” his own prejudices and, especially, how Atwater’s faith empowered her to see a salvageable core of humanity that could be reached beneath Ellis’s exterior of hate.

Best of Enemies depicts the firebombing of an African American school and the systematic inequalities of segregation. But the two most frightening scenes in the film may well be incidents of violence …