Why do films like ‘Jurassic World: Fallen Kingdom’ urge us to rejoice in the death of the wicked? 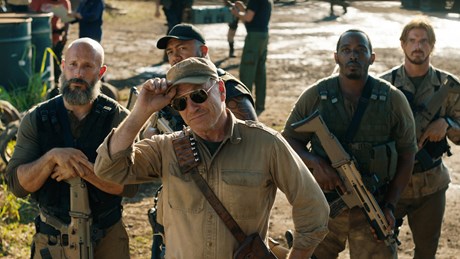 “Nasty woman!” hunter Ken Wheatley (Ted Levine) says of Claire Dearing (Bryce Dallas Howard) after she says something defiant to him from her makeshift prison cell in the back of his truck.

Wheatley has already shot a man with tranquilizers and left him for dead on an island with an active volcano and wild, roaming predators. He has threatened to murder a medical biologist if she doesn’t save a valuable specimen that has been shot. He is part of a business scheme that will threaten countless lives—the entire world, really—one he enters into with relish simply for the reward of money. (Wheatley’s most often repeated line is, “I want my bonus!”) He’s also a sadist, pulling teeth from sedated animals for a makeshift necklace while chuckling about how much pain they will feel when their anesthesia wears off.

The purpose of such relentlessly underlined psychopathy is no mystery to anyone who has sat through a summer action movie in the last 20 years. He’s being marked for execution, and the movie wants us to know it is okay to cheer when he finally gets what’s coming. And it works. The audience with whom I saw Jurassic World: Fallen Kingdom chuckled gleefully as Wheatley entered the cage of a particularly vicious dinosaur genetically altered to be larger and more aggressive than its ancestors of past movies. When it wakes up, as we knew it would, and bites his arm off, as we knew it would, the camera lingers on his agonizing final moments.

This is nothing new. To a large extent, the summer action movie’s reason for being is to satisfy our bloodlust. The first film I reviewed for my college newspaper, James Cameron’s Aliens, features an evil corporate villain …