Even for Christian Combat Veterans, No Easy Answers

Home » News » Even for Christian Combat Veterans, No Easy Answers

What two recent films get right, and what they miss. 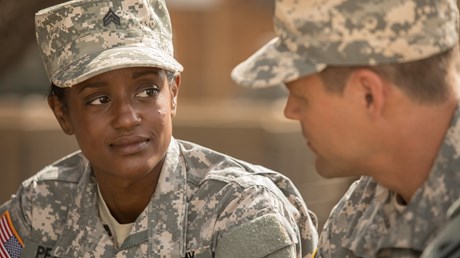 The recent films Unbroken: Path to Redemption and Indivisible center on spiritual responses to the personal toll of war. Those responses are, first and foremost, personal and individual. It would be a mistake to think that the transformations we see in the films can be generalized to all, most, or even a significant minority of war-zone veterans. But, however limited their perspectives, the films are helpful in that they show us two of the paths war veterans can take—two of the ways the Lord can meet veterans in their particular circumstances.

Unbroken (a follow-up to the hit 2014 biopic) tells the postwar story of Louis Zamperini, who survived nearly 50 days on a raft in the Pacific only to be imprisoned and brutalized by the Japanese. His first response to the hatred and nightmares that followed the war was alcohol. The more lasting answer was the gospel, preached at a Billy Graham crusade and responded to in the form of a traditional altar call.

Indivisible is also based on a true story—that of Darren Turner, an Army chaplain who discovered that Sunday school theology and the world of war don’t easily mix. Early in the film, we see an eager Turner anticipating a long deployment to Iraq, saying, “I signed up to be where the need is.” The film depicts him making a difference in some soldiers’ lives—not so much the result of his homilies, which seem to fall flat, but because of his personal example. Yet war wears on him and he unravels. Back home, a senior chaplain tells him, “I’m not sure there is faith without some doubt.”

I approach these films not as a movie critic but as one who over 20 years has interviewed hundreds of combat veterans. Much was familiar. Unbroken, …