Fleeing North in the Full Armor of God

Home » News » Fleeing North in the Full Armor of God

When our church offered therapy to traumatized migrants, we witnessed the healing power of Scripture. 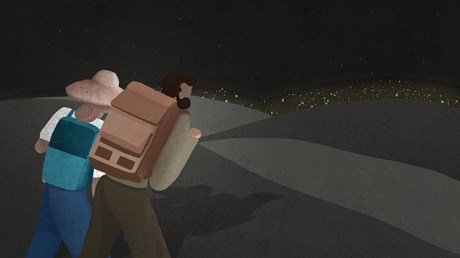 Traffickers had trapped Mayra, a Honduran woman, and her three children in a southern Mexican house alongside a crowd of other migrants. The traffickers had stolen her money and her phone.

Her wide-eyed six-year old son was slurring his speech. Her two-year-old daughter was throwing tantrums and retreating into a shell. Her slender preteen daughter was being groomed for sex, and Mayra’s own pregnant belly continued to swell. She had come this far to save her children from the horrors of her hometown, where three of her siblings and her husband had been murdered. But she found herself paralyzed in a place full of drug use, sexual violence, and noise.

What Mayra felt she could do was pray and sing the praise songs she learned in church, which she converted into whispered lullabies. Huddled on a dirty mattress in a corner, she prayed the “full armor of God” over her children each day for weeks. She tried to shield them with her pregnant body and transform the commanding passage of Ephesians 6 into a blessing: “Be strong in the Lord and in his mighty power.”

Normally it takes a month for a family to get from Honduras, Guatemala, or El Salvador to the southern border of the United States. Immigrants ride freight trains and buses and walk for miles through cities and wilderness. Along the way, they are targeted for robbery, kidnapping, and sexual exploitation.

Despite these dangers, asylum-seekers from these countries have been coming to the US in increasing numbers. Most turn themselves in at the southern border and, after initial immigration screenings for fear and credibility, many are taken to detention centers while they coordinate with US-based family or sponsors who will provide plane or bus tickets …