How Christian Art Historically Depicts Women and Their Bodies

Examining how female biblical characters have been visually represented over time. 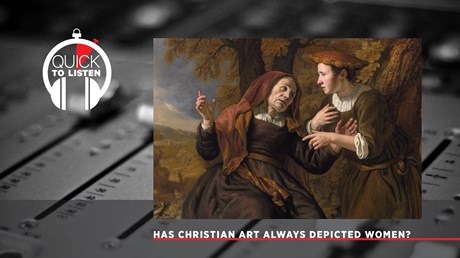 As part of the launch of her latest book, Shameless: A Sexual Reformation, Lutheran pastor Nadia Bolz-Weber asked would-be readers to mail her their purity rings. Then she took the submissions and had them melted down and turned into a vagina statue.

While the action earned attention for its shock value, Anglican priest Tish Harrison Warren recently pointed out for CT that this was far from the first example of vaginal (or yonic) art in the Christian tradition.

“No reasonable person could say that these Christian yonic symbols indicate that the early church was a bastion of feminist liberation,” Harrison Warren wrote. “In the ancient church, as now, misogyny abounds. Still, at the very least, they show that the female body was not (and is not) deemed dirty, unholy, or otherwise bad.”

Christian art has always depicted women, says Robin Jensen, a professor at Notre Dame who specializes in the history of Christianity and liturgical studies.

“Surprisingly, though, what you’d expect to find in Christian art is sometimes not there in the initial stages,” said Jensen, the author of Understanding Early Christian Art. “If you were to think about the two most common themes in Christian art from all the centuries of Christian art through and time, you might say the crucifix and the Madonna and child. Neither of those are going to be appearing until much later.”

Instead, art based on Bible stories with male and female characters from both the Old and New Testament is what is initially most prevalent, says Jensen.

Jensen joined associate digital media producer Morgan Lee and theology editor Caleb Lindgren to discuss the extent to which fertility is a theme in Christian art, how nudity is …