How Larry Norman Became the Elvis Presley of Christian Rock

His music inspired a generation of Jesus freaks, but he never shook the suspicion of being a wolf in sheep’s clothing. 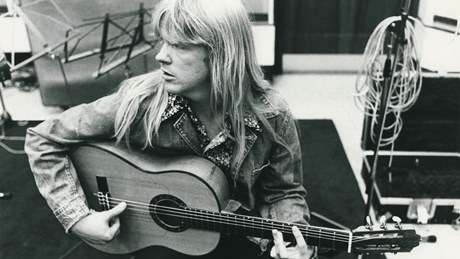 In 2014, John Darnielle, of the band the Mountain Goats, gave his first novel an obscure title—Wolf in White Van. In the book, the protagonist described watching the Trinity Broadcasting Network many years before. Televangelists Paul and Jan Crouch were discussing Satanism in rock music with an “expert” guest. The hosts were shocked to learn that demonic messages were hidden everywhere—even in albums from so-called Christian artists. To prove his point, the guest produced a vinyl LP, which was placed on a turntable and played backward. Supposedly a mysterious phrase could be heard: “Wolf in White Van.”

Why was this phrase so nefarious? Surely it didn’t help matters that the song it was taken from, “666,” was about the Antichrist. But the larger worry was that the artist, Larry Norman (1947–2008), was a wolf in sheep’s clothing. Such suspicion dogged the career of the man who was called the “Father of Christian Rock.”

For decades, Christians have been obsessed with the prospect of hidden messages, both in the Bible and outside it. I confess I spent considerable time in my teenage years listening for purported backward masking on Beatles, Led Zeppelin, and Rush records. What possessed earlier generations of evangelicals to spend so much energy on conspiracy theories—to focus less on the songs themselves than what they sound like played in reverse? Why did so many Christians assume that rock ’n’ roll music was the Devil’s handiwork, plain and simple?

My curiosity led me to a man who, once upon a time, seemed to be the source of all the trouble. Thanks to his estate, I was granted access to Larry Norman’s considerable archives. …