The Portland-based animation studio is seeing unprecedented success in an age of biblical illiteracy. 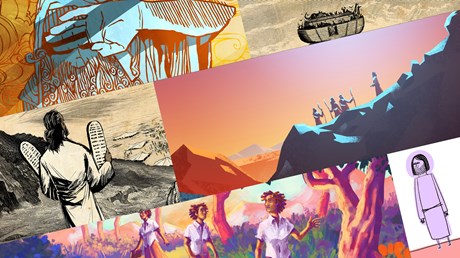 My screen fills with a glow of color, rich golds and reds blending and shifting. Particles phase into the outline of a DNA double helix, mimicking the pinpoint lights of the globe. A soothing voice speaks, and a story leaps into animated life: a man falling victim to a cosmic setup, a heavenly gamble with the reputation of God at stake. A whirlwind forms among the images, constellations flickering within like lightning or the synapses of a great mind. All morphs into a virtual tour of the universe. Sea turtles swim among the stars; the rings of Saturn give way to underground caverns prickling with crystals.

It plays on, until in just 4 minutes and 39 seconds I have “seen,” like never before, the Book of Job. It’s time I read Job again, I think.

I’m watching a video from The Bible Project, a Portland, Oregon, animation studio. With my viewing, the video will have been watched more than 3.4 million times. The Bible Project has more than 1.2 million subscribers on YouTube and over 90 million total views on their videos. I’ll soon be having coffee with Bible Project founders Tim Mackie and Jon Collins, old acquaintances, at their offices to hear the story behind their efforts to connect the world to videos like this—visions of the Bible as “a unified story that leads to Jesus.”

Since the Reformation, Protestants have held that a rich relationship with the Bible is central to the Christian life. But today, confidence in the Bible’s truth and reliability is rapidly eroding, questions about how the text came to us are at an all-time high, and even among scholars friendly to faith, there seems to be little consensus about how to read our sprawling, enigmatic, diverse, and often-confusing …