How the Jesus People Made the Bible Cool

Home » News » How the Jesus People Made the Bible Cool

From Billy Graham to Bob Dylan, how a youth movement briefly changed the world. 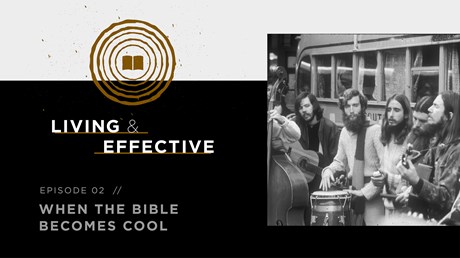 It may seem impossible, especially since Christianity has always been rooted in timeless tradition and wisdom.

Sure, pop musicians and actors may embrace the Christian faith in carefully considered ways, but when talking about it, they tend to keep their theological cards close to the vest.

What if rebirth, exclusivity of the gospel for salvation, good works accompanying genuine faith, and an explicit hope for Christ’s second coming became explicit as part of a cultural phenomenon?

On the second episode of Living & Effective, Richard Clark explores the origins and effects of one of the most impactful Christian youth culture movements in modern history. With special guests Larry Eskeridge, Greg Thornbury, and Trevin Wax, Clark finds out exactly how the Jesus Movement was so successful in thrusting the Bible into the mainstream, and what happened after public fascination with the movement faded away.