How This Dutch Congregation Pulled Off a 96-Day Service

A deeper look at how hundreds of Christians from across the Netherlands came together to worship God and protect an immigrant family from deportation. 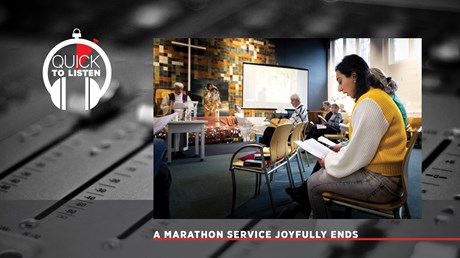 For nearly 100 days, more than 500 Dutch pastors—as well as some from across the continent and the Atlantic—across denominations gathered in Bethel Church for a continuous worship service. Why? To protect a refugee family from deportation.

The Dutch government is generally prohibited from interrupting religious services, so the Protestant congregation kept extending their gathering during the debate over family asylum or kinderpardon.

[Last week,] officials agreed to allow the Armenian family at Bethel—along with 700 others who have lived in the country for more than a decade—to have their cases reviewed again rather than face immediate expulsion.

Christian leader Axel Wicke was closely involved with the planning and execution of the hundreds of hours–long service. Some of Wicke’s elderly church attendees told him that they stopped by the service in the middle of the night when they woke up and couldn’t go back to sleep.

“I’m now quite familiar with who of my parish members are night people,” he said.

Wicke found the experience transformative for his own spiritual life but also said it offered a profound picture of Christianity for people with little knowledge of the religion.

“The reason why we did this was quite sad or depressing … but it was also a really big gift to this parish and to the church in the Hague,” said Wicke. “I still get messages along the line, ‘Finally, I know why there is a church.’ It was a very fundamental way of recognizing, ‘That’s what the church is for.’”