How the president on the other side of the Moral Majority ended up invited to its unofficial headquarters. 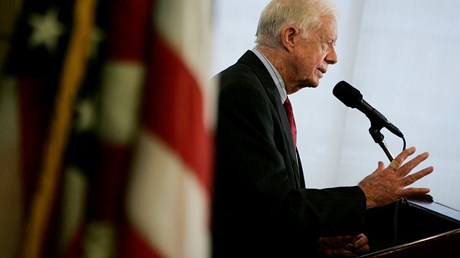 Former President Jimmy Carter has accepted an invitation to deliver the commencement address at Liberty University on Saturday. Many will view this announcement as surprising, some even as disappointing for one reason or another. I view it as hopeful.

Carter is a progressive evangelical; the Falwell family and Liberty University identify with fundamentalist evangelicalism. Politically, Carter is generally liberal while the Falwells are conservative. Historically, Carter and Liberty’s late founder Jerry Falwell Sr. had differed sharply and personally on multiple issues—most notably civil rights and American defense of Israel.

So why, in this current era of adversarial politics in the state and even in the church, are the two contrasting forces coming together?

It is less surprising that Carter is willing to accept the invitation than that Liberty chose to offer it in the first place. While the former president can be unflinching on what he views as absolute moral principles (such as his opposition to racism), his career-long natural instinct has been to bring people together as much as possible (like when he met with former Israeli Prime Minister Menachem Begin and former Egyptian President Anwar Sadat in 1978 at Camp David).

To work cooperatively with a broad range of evangelicals in achieving common evangelistic and social justice goals would not normally be difficult for Carter.

By contrast, fundamentalists, almost by definition, are more or less separatists. But Jerry Falwell Sr. modified that separatist mentality by entering the political arena as the founder of the Morality Majority, which set out to influence the conservative social agenda.