Christians are talking past each other once again. What’s going on? 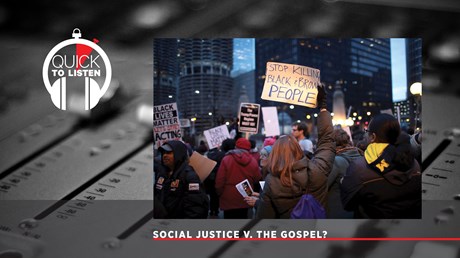 Last week, John MacArthur and a dozen other Christian leaders launched a website presenting The Statement on Social Justice & the Gospel. In the statement, the signatories claim that the social justice movement endangers Christians with “an onslaught of dangerous and false teachings that threaten the gospel, misrepresent Scripture, and lead people away from the grace of God in Jesus Christ.”

Over the course of 14 sections, the statement addresses cultural narratives “currently undermining Scripture in the areas of race and ethnicity, manhood and womanhood, and human sexuality” and argues that a secular threat is infiltrating the evangelical church.

At the time of this recording, the statement has received around 7,000 signatures.

The statement comes at a time when a series of blog posts and sermons attacking social justice from MacArthur, a popular California pastor and author, have sparked controversy in the evangelical community.

The harsh reaction to MacArthur’s ideas was shaped by the events of the past four years, says Washington, DC, pastor and Gospel Coalition council member Thabiti Anyabwile.

“They land in the midst of an evangelical movement that is already fraying and fracturing under the weight of the last five years, if I’m dating this back to the Mike Brown shooting and the fallout,” said Anyabwile. “Evangelicalism as a movement splintered instantly as to how they understood that issue and different quarters circled one another in suspicion and sometimes outright attack.”

Further, the statement’s specific attacks on particular nomenclature have been troublesome because its drafters haven’t defined their terms, says Anyabwile.