The Netflix show offers a fresh way of looking at both Christians and immigrants. 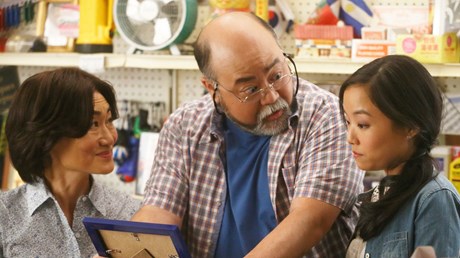 From the first moment of the pilot episode of Kim’s Convenience—a Canadian network comedy created by Ins Choi, now available on Netflix—I was squirming in my seat. But it took me some time to figure out why.

Kim’s Convenience plunges the viewer into a modern variation on the family sitcom, where both the urban, diverse setting and the main character’s heavy accent take center stage. That accent seems to signify everything that’s out of place about Mr. Kim, the protagonist and patriarch of the show. He interacts with various groups of customers in his convenience store in a busy urban neighborhood in ways that are alternatingly charming and cringe-inducing.

From his attempts to capitalize on a gay-pride parade happening in his neighborhood to his overbearing ways with his daughter, Janet, Mr. Kim is the flashpoint for the viewer. Do you love him or not? Do you find him smart and gregarious or ridiculous and out-of-touch? Kim’s Convenience, for all of its charm and goodwill, has something that will no doubt offend—or at least make uncomfortable—nearly everyone on the scale from conservative to progressive. But paying attention to what makes us squirm illuminates the importance of the show. Kim’s Convenience is one in a slew of pop culture artifacts bringing accents, culture, and stereotypes—and faith—into the mainstream in ways that ask us to face squarely our discomfort with them.

There is a troubled history to the public reception of various Asian accents, from Mickey Rooney in Breakfast at Tiffany’s to Long Duk Dong in Sixteen Candles and beyond. My sister, who watched the movie Downsizing in the theaters in Oregon, told me …