Level Ground at the Cross

Billy Graham drew people together his whole life. In a segregated South, he wrestled with what that should mean. 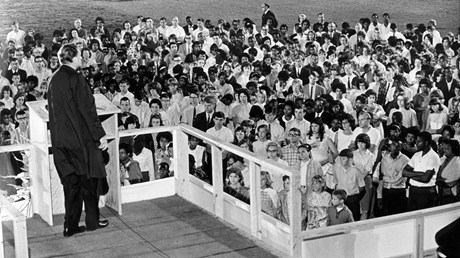 Among Billy Graham's greatest contributions to evangelicalism was the way he defused prejudice to bring people together. Perhaps more than any other high-profile American figure in the 20th century, Graham challenged Christians to look beyond worldly divisions and remember their call to the ministry of reconciliation.

In the early 1950s, a few years before Martin Luther King Jr. and the civil rights movement garnered the national spotlight, Graham was talking about the church's obligation to overcome the race problem in America. “The ground at the foot of the cross is level,” he said, “and it touches my heart when I see whites standing shoulder to shoulder with blacks at the cross.”

Decades later, in a 1993 Christianity Today article, Graham was still on message. He wrote, “Of all people, Christians should be the most active in reaching out to those of other races.”

To be sure, Graham was never at risk of being mistaken for a civil rights activist. His proclivity for caution and incremental steps on controversial matters was another one of his legacies to the evangelical movement. Still, for a white evangelical of his stature to put the issue of race relations on his ministry's agenda was quite remarkable.

Graham did not, of course, arrive on the scene 60 years ago with a fully developed theology of inclusion. It took him years to finally shake off the rituals of American apartheid that defined the era of his national emergence. For instance, during the early years of Graham's ministry, he freely accepted the custom of segregated seating at his Southern crusades.