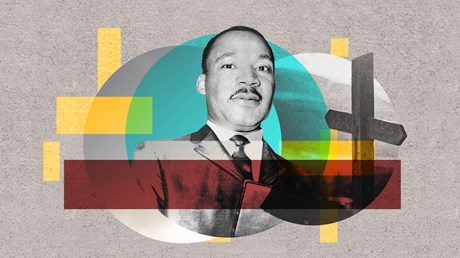 These solemn words were uttered by King’s distant friend and spiritual mentor, Howard Thurman, as he eulogized over a San Francisco radio station on the evening of King’s assassination. The world was shaken. Riots were taking place across 110 cities. King’s murder was declared “a national disaster.” Stokely Carmichael, the civil rights leader who first used the slogan “black power,” went as far as to say, “When white America killed Dr. King, she declared war on us.”

As “pastor of the civil rights movement,” Thurman knew he needed to speak words of comfort and hope but he felt there were no words that could possibly do justice to King’s life and legacy. Still, he knew he must say something.

Weighing on Thurman’s mind was the awareness that King’s assassination “reveals the cleft deep in the psyche of the American people, the profound ambivalence and ambiguity of our way of life.” Just a few hours ago King’s voice could be heard preaching freedom and hope in his majestic sermon, “I’ve Been to the Mountaintop.” Now there was only the voice of anguish crying out from “the heart of our cities, from the firesides of the humble and the mighty, from the cells of a thousand prisons, from the deep central place in the soul of America.”

In Thurman’s estimation, King’s greatest contribution was the way he embodied the epitome of Christianity and its ethical implications in America. He was able “to put at the center of his own personal religious experience a searching ethical awareness.” He embodied the revolutionary ethic of the religion …