Martin Luther King Was Fearful, But the Bible Made Him Brave

Home » News » Martin Luther King Was Fearful, But the Bible Made Him Brave

What happens when we realize the Bible is meant for more than teaching us right from wrong? 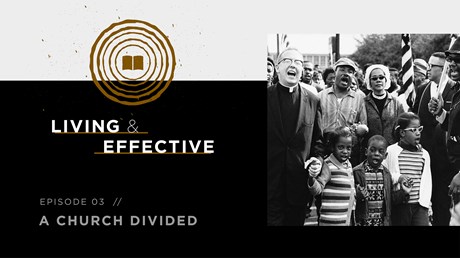 How did the Bible embolden a movement of civil rights activists who felt abandoned and antagonized by their brothers and sisters in Christ?

As Christians, we are called to hold fast to biblical convictions, even when cultural currents are pulling us in another direction. We are called to bear one another’s burdens. While some white evangelicals marched with Dr. Martin Luther King Jr. for racial equality, many others were complacent about—and even complicit in—a status quo that resulted in their black brothers and sisters being treated as less than human.

In Episode 3 of Living & Effective, Richard Clark talks to Jemar Tisby and Mika Edmonson about how white evangelical churches and institutions—including Christianity Today—responded to segregation, and the Bible inspired a more redemptive response to oppression than our human responses of fight or flight.