God’s messengers can be both bombastic and surprisingly subdued. 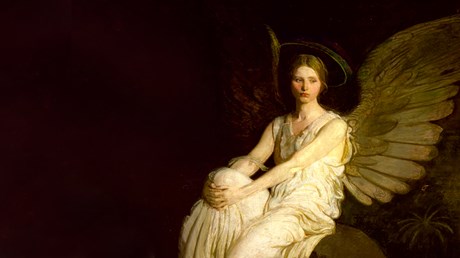 In my years of writing, I’ve not paid much attention to angels. I’ve never knowingly encountered one—knowingly, I say, for how could I tell for certain? Supernatural go-betweens, angels operate in the invisible world, rarely revealing themselves to those of us who occupy the material world.

I think of angels as something like the dark matter that physicists are still trying to understand. Our familiar world of matter—the Earth, stars and planets, everything that we can see—represents only 5 percent of the universe. Dark matter, which doesn’t interact with “normal” matter, comprises some 27 percent, according to the latest estimates. We know dark matter exists due to its effect on gravitation but can’t easily detect it since it doesn’t absorb, reflect, or emit light.

Evidently angels have the ability to cross over between darkness and light, spanning the invisible and the visible worlds. They may act in subtle ways, through dreams, whispers, and mysterious coincidences—witness the many accounts of “guardian angel” experiences. Or, as in the Bible accounts, they may manifest themselves so dramatically that they must begin with the words “Fear not!”

As Christmas approaches, you can’t avoid angels. They turn up in such places as Christmas carols in the mall, greeting cards, wrapping paper, Nativity sets, and the tops of decorated trees. These cute, cuddly depictions have little in common with the angels of the Old Testament, who often came as warriors to dispense judgment.

Puzzled by this abrupt change in style, during Advent I took a closer look at the dozen accounts of angels in the four Gospels.

In the four centuries …