The tradition is largest in the US but today has a strong international presence. How did that happen? 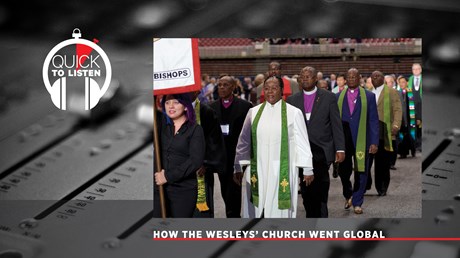 For the past four days, the General Conference of the United Methodist Church has been reexamining its doctrines on human sexuality. From Christianity Today’s report from yesterday:

The denomination’s “Traditional Plan” passed, with 438 votes in favor and 384 against (53% to 47%), in the final hours of a special UMC conference held this week in St. Louis to address the issue of human sexuality.

While this decision will likely have broad global consequences, it is also one that has been heavily impacted by the denomination’s large international presence. The UMC has about 7 million lay members in the US and 5.5 million overseas, and they operate in more than 130 countries.

But the denomination's broad reach isn’t anything new.

“It’s inherently a global movement,” said J. Steven O’Malley, a professor of Methodist Holiness history at Asbury Theological Seminary, who recently spent the year working on a project called “The Origin of the Wesleyan Theological Vision for Christian Globalization and the Pursuit of Pentecost in Early Pietist Revivalism.”

O’Malley joined digital media producer Morgan Lee and editor in chief Mark Galli to discuss what was at stake at the most recent UMC meeting, how the denomination came together 50 years ago, and how it ended up around the world.

This episode of Quick to Listen is also brought to you by Libromania, a podcast for book lovers from the Close Reads Podcast Network. For more information go to closereadspods.com or subscribe …