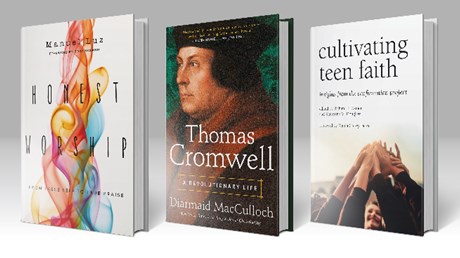 Luz, the creative arts pastor for a church in Northern California, describes himself as a worship leader who specialized in “spectacle”—musical and technological wizardry in a big-church setting. In Honest Worship, he measures this emphasis on human creativity against Jesus’ words to the Samaritan woman—that worshipers of God “must worship in Spirit and in truth” (John 4:24). “Here,” writes Luz, “is my fear for the church: in the midst of all the smoke machines, high-def video loops, and latest worship hits, we may be settling for something less than true transcendence, something less than Spirit-breathed worship, something less than God on God’s terms.”

MacCulloch, the British historian and author of wide-ranging histories of Christianity and the Reformation, has turned his attention to Thomas Cromwell, Henry VIII’s right-hand man during the English Reformation—at least until the king had him beheaded. Drawing from a massive trove of letters and official documents, MacCulloch pieces together the life of one of the most influential architects of Protestantism in Britain. Cromwell, he writes, “shaped a great revolution in his country’s affairs, which has in turn shaped much of the modern world, not least that still-Protestant power, the United States of America.”

How do American churches bring their youngest members into closer fellowship with the larger church community? …