Not Worth a Shot: Why Some Christians Refuse Vaccinations on Moral Grounds

Home » News » Not Worth a Shot: Why Some Christians Refuse Vaccinations on Moral Grounds

The use of fetal cell lines from the 1960s is another sticking point in the vaccine debate. 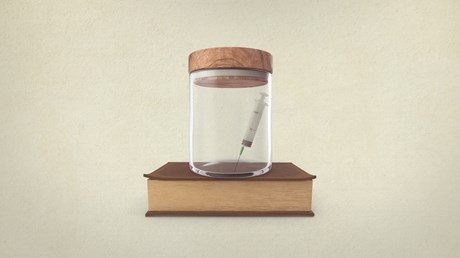 For certain Christians, the decision of whether to vaccinate comes down to the origins of the vaccines themselves. Some pro-life parents cite a moral disgust and a deep lament over the use of 58-year-old aborted fetal cell lines in development for several recommended immunizations, including MMR (measles, mumps, and rubella) and chickenpox.

“The use of fetal cells in vaccine study and creation is one of the primary reasons we do not vaccinate,” said Mandy Reynvaan, a mother of five in Oregon, where a measles outbreak has flared over the past few months. “The methods used to obtain these cells are horrifying.”

This week, Reynvaan traveled to the state capital to lobby against a bill that threatens to remove a parent’s right to refuse vaccinations for school-age children unless there is a medical reason. If passed, Oregon will be the fourth state to remove non-medical exemptions.

Furthermore, Reynvaan, who teaches fourth grade, is concerned that the state is not far off from mandating all teachers be vaccinated, which would put her job at risk. She and her husband have filed philosophical exemptions to vaccines for each of their children.

The bill making its way through the state legislature comes in response to 14 measles cases in Oregon and 73 in neighboring Washington state, which Tuesday passed a bill to the governor’s desk that would limit personal and philosophical exemptions for the MMR vaccine (but not religious exemptions).

Across the country, there have been over 600 cases in 22 states, spurring several state proposals that, in an effort to protect against the spread of disease, would restrict parental rights and religious freedoms for families who skip immunizations due to their faith …