Our Venezuelan Brothers and Sisters in Christ Are Suffering

Home » News » Our Venezuelan Brothers and Sisters in Christ Are Suffering

Here’s how the church is faring as the country experiences increasing political tumult, blackouts, water shortages, and out of control inflation. 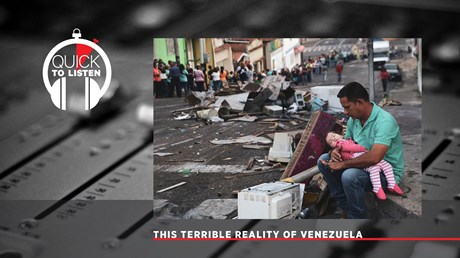 Venezuela has been in crisis for years, but the situation there has arguably taken an even greater turn for the worse in recent weeks. Recently, a blackout cut off the entire country from electricity. Citizens have also been victim to frequent water shortages and a currency that is losing its value at unprecedented rates.

At the same time, more than three million people have left the country of 31 million people, roughly 10 percent of the population.

The country is overwhelmingly Roman Catholic, although, like much of Latin America, has experienced the growing influence of Protestantism. According to Pew Research Center’s 2014 numbers, Protestants currently make up 17 percent of the population.

Germán Novelli-Oliveros, the Venezuelan-born-and-raised pastor of Grace Lutheran Church in Milwaukee, joined digital media producer Morgan Lee and editor in chief Mark Galli to discuss how oil brought Protestantism to Venezuela, why pastors won’t speak out politically, and his advice for people who want to help.

This episode of Quick to Listen is brought to you in part by the MA in Humanitarian & Disaster Leadership program at Wheaton College Graduate School, preparing leaders to serve the most vulnerable and the church globally. For more information, go to wheaton.edu/HDL.

This episode of Quick to Listen is brought to you in part by Kinship United, a non-profit organization working with every day superheroes like you to rescue orphans and widows from abuse, trafficking, or worse, for the past nineteen years. To learn more about how you can save a life, visit KinshipUnited.org.