Why supporting Muslims on the Isle of Lewis is mere Christianity. 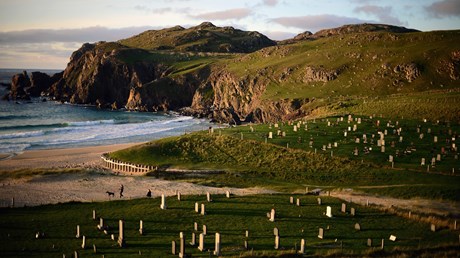 Despite its size and location, the Isle of Lewis off the northwest coast of Scotland occasionally makes national news in the United Kingdom because of its conservative religious practices—including the strict observance of the Sabbath by many on the island.

Lewis was the site of the UK’s last great revival—beginning in 1949 and carrying on for three years—and remains one of the most devout parts of the country.

Over the years, there have been controversies relating to the operation of ferries to the mainland on Sundays. More recently, a movie theater has opened seven days a week, while a leisure center maintains its Sunday closure. All have drawn media coverage with quotes from Christian spokespeople reported as being “outraged” by the proposals.

The latest twist in religious affairs has occurred in Stornoway, with 8,000 people the largest town in the group of islands. However, it doesn’t involve Christians outraged about Sunday openings, but that a Free Church of Scotland minister was not outraged by plans to build the first mosque on the largely evangelical churchgoing island.

The last census in 2011 showed just 61 Muslims living in the Western Isles; however, this number has been bolstered in recent years by six refugee families arriving in Stornoway fleeing the war in Syria. Plans to build a mosque have been granted planning approval and funds crowdsourced for the conversion of a derelict house—hoped to be completed in time for Ramadan in May.

The press did manage to find a source who was outraged by the plans. But the quote came from a small breakaway denomination, the Free Church of Scotland (Continuing). This was not representative of the majority of local Christian opinion. …