Colombo theologian: God gives Christians the freedom to leave the revenge cycle and instead love and bless Muslims. 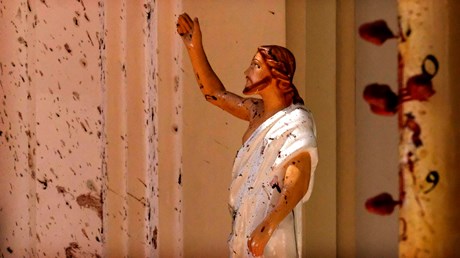 I was not at church in Colombo on Easter Sunday morning, as I was sick and had stayed home. Then text messages began to come about a bombing, then several bombings, in my home town and in two other towns. One was only a few miles from my home.

Ten years after our protracted war had ended, I realized that Sri Lanka, my dear nation, was again confronting severe violent attacks. I had preached several times in one of the targeted churches, Zion Church in Batticaloa. The sister of one of my colleagues was at the service, and was seriously injured. She is still battling for her life. The death toll has risen to 320. Unbelievable.

Whenever tragedy hits a nation, Christians need to ask how to think biblically in response to the situation. As Christianity is a body religion, it is best that groups of Christians meet and discuss a common response to the challenges. We cannot delay our response. There are both immediate responses and more long-term responses to heal the wounds of our people.

I have thought of at least six necessary responses from Christians to what has happened:

Christians must join the nation in lamenting and mourning over our losses. Protestants have been somewhat lacking in espousing a theology of groaning (Rom. 8:23) that opens the door to lament (though that seems to be changing). The Old Testament has many instances of elaborate mourning customs, and that is found in the New Testament too. The church responded to Stephen’s death with a “great lamentation over him” (Acts 8:2; also see 9:39). Each country has its cultural ways of lament, and we must look for practices to adopt which harmonize with Christianity. In addition to Easter time, April is New Year in Sri Lanka and most Christians …