Why the best church small groups might take their cues from the Twelve Steps. 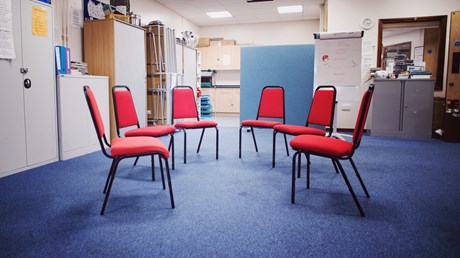 I used to tell my wife and friends that I needed a “non-small-group small group.” Then I began to wonder if I just needed an AA group. I am not an alcoholic. Alcohol just doesn’t do it for me. But Alcoholics Anonymous does. I attended an AA group while writing a book called Addiction and Virtue, and I’ve missed it ever since.

I am a Christian, or at least I am trying to be. I want to be a disciple of Jesus. But small groups just don’t interest me. I’ve attended many and they have all been more or less disappointing.

I know I’m not the only person who has encountered something spiritually vital in AA that is missing from small groups. My students at Biola University, where I teach a class on addiction that requires their attendance at AA meetings, often express this sentiment. Despite being immersed in the evangelical subculture of our university, most of them describe AA as the most spiritually “real” community they’ve ever witnessed.

This is not an especially new insight. Devotionals and leadership books and church bloggers have long tipped their hats to lessons that can be learned from AA. This magazine, too, has featured an ongoing conversation about the spiritual power of AA.

But in my teaching and research I have yet to see anyone take the comparison between AA and Christian community all the way, indulging it and carrying it to its full conclusion: If we took AA as our guide—all of it—how would we do small groups differently? What, if anything, would change? The question is not too farfetched, since AA began as an offshoot of a once-potent Christian discipleship movement.

AA founders Bill Wilson and Bob Smith were acolytes of the …