Spanning the Great Schism Between Evangelical and Orthodox Christians 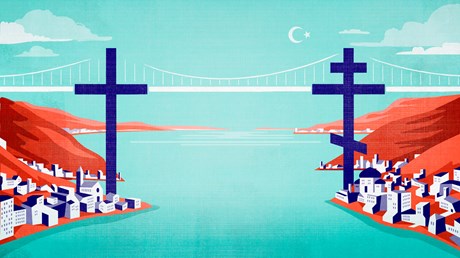 “You can’t find a page like this in all of church history,” said Sahak Mashalian, an Armenian Orthodox bishop and the principal scribe of Christianity: Basic Teachings. “It is akin to a miracle.”

“The biggest obstacle to the gospel is the splits and fights within Christianity,” said Thomas Schirrmacher, the World Evangelical Alliance (WEA) theology leader who spoke at the recent launch of the book in English. “[We] must prove there is one Christian message, starting between churches themselves.”

There was a “wall of enmity” separating Protestants and Orthodox in Turkey, said Behnan Konutgan, former head of the Turkish Evangelical Alliance. As the dialogue progressed, most evangelicals were “suspicious.” But about a decade ago, Konutgan and Schirrmacher began regular yearly visits with Orthodox leaders. Reconciliation was a key goal because a Turkish Protestant pastor had slandered Orthodoxy’s global head, Ecumenical Patriarch Bartholomew I.

Together they set up a procedure to handle such complaints. Shortly thereafter, Schirrmacher launched extensive religious liberty advocacy by the WEA for the Eastern Christian church.

“Many evangelicals are short-sighted, not realizing the Orthodox and Catholics have been here for hundreds of years,” Konutgan said. “If they read this book, they will see we believe in 90 to 95 percent of the same things.”

So whether it is nudging …