Scripture both comforted and haunted the German theologian. 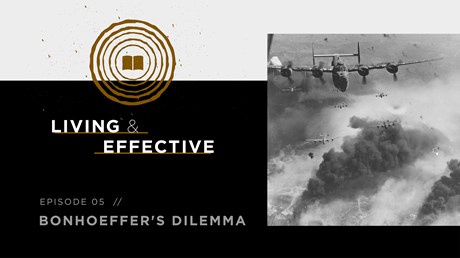 Dietrich Bonhoeffer is a complex figure, someone who has been misunderstood and misrepresented time and again. And those misunderstandings have real implications. Maybe his most well-known act – his involvement in a failed attempt to kill Adolf Hitler – was the playing out of an ethical conundrum that resonates with anyone in times of political and social upheaval.

What separates Bonhoeffer from so many of his peers, though, was that even though he failed, he chose to act.

So how did a man so immersed in social and political chaos have the confidence to act, even when he knew he might fail in massive, consequential ways?

On the latest episode of Living and Effective, Richard Clark dives into the life of Bonhoeffer with guests Reggie Williams (author of Bonhoeffer’s Black Jesus), John Hendrix (Author and illustrator of The Faithful Spy), and Laura M. Fabrycky (volunteer guide at the Bonhoeffer-Haus).