Willow Creek changed how Americans do church. What happens now? 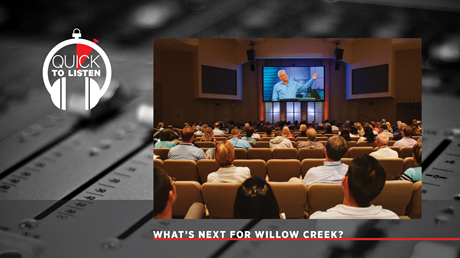 Last year, Willow Creek Community Church founder and lead pastor Bill Hybels announced he was passing the baton to two heirs and would be retiring in October 2018.

A lot has changed in 10 months.

Since that announcement, 10 women have accused Hybels of misconduct. Earlier this week, The New York Times reported that one of leader’s former assistants accused the Willow Creek founder of repeatedly groping her. And on Sunday, Steve Carter, whom Hybels who indicated would succeed him as teaching pastor, announced his resignation.

All of this occurred several days before Willow’s Global Leadership Summit, an annual event hosted at Willow’s Barrington campus and streamed at hundreds of locations around the world.

As CT, the Chicago Tribune, and now The New York Times have reported on allegations of sexual misconduct and complaints about the Willow Creek board’s response, some less familiar with Willow Creek wonder why the ministry deserves all this attention.

“Willow Creek was revolutionary in that previously, churches assumed that all that was needed to reach unbelievers with the gospel was simply to say it one more time and not do anything particularly different,” said Marshall Shelley, a longtime editor for Leadership Journal.

Rather than just continue to sling religious language at the world, Willow’s leaders realized that “our culture is spiritually blind and is not going to respond to positively to a message that has grown overly familiar or has grown stale,” said Shelley. “Willow Creek said ‘We need to communicate in a way that is going to get people’s attention. Not say it the way we’ve said it thousands of times before but say it in a way that they’ve …