The Dark Night of the Dark Knight's Soul

Home » News » The Dark Night of the Dark Knight's Soul

The hype declared Batman an atheist. There’s more to it than that. 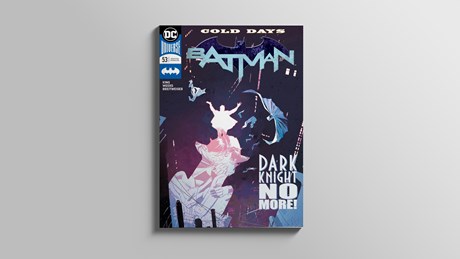 A young boy kneels by his bed, lit by a single candle. His hands clasped in a prayerful posture, he pronounces a vow that will shape the rest of his life: “And I swear by the spirits of my parents to avenge their deaths by spending the rest of my life warring on all criminals.”

In the original telling of Batman’s origin, the traumatized young Bruce Wayne, days after witnessing the brutal murders of his parents, has committed himself to a path that will become a double life, torn between light and darkness. When he eventually takes on the likeness of a night creature to terrify criminals and to ensure no one else will suffer his losses, he will succeed so well that the being he created leads to an identity crisis of faith—one that might resonate in our own hearts.

Weeks ago, the news circulated that in Batman #53, Batman would be declared an atheist. There was little surprise, since Batman is the most self-made superhero in the comic book pantheon, and the one least likely to feel dependent on a supernatural God. But fans were intrigued to hear that writer Tom King was going beyond the implications that Bruce Wayne acknowledges no Higher Power, and exploring the dynamics of how this rejection of faith came to be and its consequences.

Yet in a tweet, King himself questioned whether Batman is actually a practicing atheist: “That’s not how I read that comic.” Indeed, the issue ends with a hint that Bruce Wayne is at a crossroads of faith in God versus faith in himself.

The three-part story, “Cold Days” (in Batman, issues #51-53)—written by King and beautifully illustrated by veteran artist Lee Weeks, an outspoken Christian—picks up after Bruce has …