The Incredible Hospitality of Good Friday 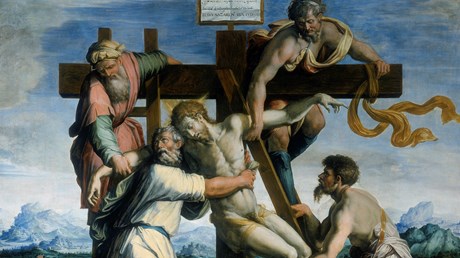 It can travel anywhere in time and space, and it looks much bigger on the inside (or smaller on the outside, depending on where you’re standing). In 1963, it blended in perfectly as a British police box. But now, the intergalactic space cruiser stands out like a sore thumb, whether it’s landed in contemporary London or in the ancient Egyptian Sahara. It is strange, a foreign object that turns up in random places. And despite it being so alien—literally—nobody seems to bat an eyelid at the presence of the TARDIS from the global hit television show Doctor Who.

The cross of Christ is a similar anomaly. Turning up in fashion era after fashion era, displayed in churches and schools and graveyards across the world, and gracing the lyrics of our worship songs and the walls of our art galleries—this ancient instrument of Roman execution has become one of the most recognizable symbols on the planet. And yet it often escapes people’s notice.

Like the TARDIS, the cross is a strange entry point to something much greater than its humble appearance would suggest. Something that seemed so small and insignificant—such as a relatively unknown Jewish man dying an unremarkable death at the hands of the Roman Empire—is, in fact, an invitation into a much larger reality. It opens up something of the cavernous depth of meaning of the love, grace, wrath, and compassion of God. It offers fresh faith for the doubter, new hope for the despondent, belonging for the lonely, and salvation for the lost. The cross is not just a commemoration of death, but an invitation to life.

At the heart of the atonement is divine hospitality, where God invites the undeserving and unexpected to come home with him.