This Church Mother Comforted the Grieving with Scientific Thinking

Macrina’s famous brothers approved the words in the Nicene Creed: ‘maker of all things visible and invisible.’ But she explained why it matters. 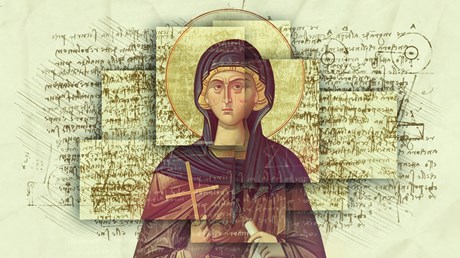 In AD 379, Basil the Great, one of the men who contributed to the Nicene Creed, died. Basil and his brother Gregory of Nyssa were two of the three Cappadocian Fathers­—men responsible for major theological decisions made in the early life of the Christian church. What is less well known is that they also had an older sister, Macrina. She was deeply precious to them for her love, her insight, and her wisdom; they even called her “Teacher.”

Macrina, who was also on her deathbed at the time, summoned up her last reserves of strength to reassure her struggling brother Gregory that he need not despair; the three of them would one day be together again. Amazingly, in order to provide evidence for this hope of resurrection, Macrina chose a topic that even today remains one of intense scientific scrutiny: the precise form and the objective reality of the mind.

As a matter of fact, this subject—and its cousin, the so-called “problem of consciousness”—has enjoyed a resurgence among philosophers, biologists, and even physicists in the last two decades. Are we humans, as possessors of “minds,” somehow more than just the sum of our parts? The debate has raged one way and the other, but the experts are no nearer a consensus today than they ever have been. It would seem therefore that Macrina, in grappling with the issue nearly 2,000 years ago, was more than a little ahead of the curve.

Intending to offer her grieving brother a hope of reunion, Macrina decided to prove to him that the very essence of a person—their mind—is not just real but eternal. To do so is a tough task; especially when we consider the awkward fact that we cannot physically detect this “mind” …