This Fantasy Novelist Showed Me What It Means to Fear God 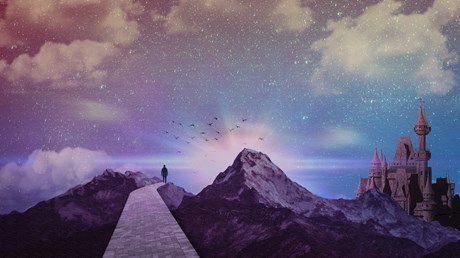 The fear of the Lord,” says Proverbs 1:7, “is the beginning of knowledge.” Indeed, God’s scriptural appearances are often terrifying. Moses sees only God’s cloaked back and is nearly undone by the sight (Ex. 34:4–8). Isaiah sees God’s throne room, complete with disturbingly inhuman angelic creatures, and is devastated by the gap between his impure language and God’s pure goodness (Isa. 6:1–5). Angels appear with the cry of “do not be afraid”—precisely because their appearance can easily inspire fear.

Even in the New Testament, divine appearances are often far from conventionally comforting. Paul is stricken with blindness (Acts 9:3–9), the apostles see tongues of flame appear on their heads (Acts 2:3), and Jesus’ glory itself is only revealed to his three closest three friends (Matt 17:1–8). Each of these moments testifies to God’s profound goodness—but it is an un-cozy goodness, a goodness so far beyond us that it fills us with awesome fear. Indeed, one of the Ten Commandments exists purely to prohibit us from cheapening our images of God, turning him into the likeness of a created thing.

If God is necessarily cloaked with mystery and awe (lest we be destroyed by the sight of his goodness), what is the Christian artist to do? In the visual arts, this debate has led, in the East and the West, to a series of iconoclasms—moments when all images of God were destroyed, lest they fall afoul of the Second Commandment. In literature, there has been less direct fear about depictions of God, but writers have confronted similar dilemmas.

The most successful depictions of God in modern writing tend to be indirect. Novelists, like …