This Pastor Criticized Trump When Pence Visited His Church 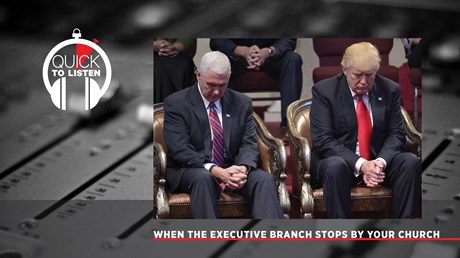 Popular Southern Baptist pastor David Platt learned that President Donald Trump was on the way to his church in the middle of the service, as he prepared to take communion. When the president arrived, Platt put his arm around Trump and prayed:

"I stand today as your pastor to vehemently denounce and reject such characterizations of the nation’s (inaudible) and of our brothers and sisters in Haiti and I further say whoever made such a statement and whoever used such a visceral and disrespectful, dehumanizing adjective to characterize the nations of Africa,” Watson said. “Do you hear me, church? Whoever said it is wrong and they ought to be held accountable.”

Watson’s actions came out of Paul’s exhortation in Ephesians 4 to speak the truth in love.

“It literally means truthing in love, and sometimes truthing in love means that one has to do as Pastor Platt did, and that is to pray for someone even if that person is someone with whom one disagrees,” said Watson. “But …