What I saw at two very different protests of violence against children. 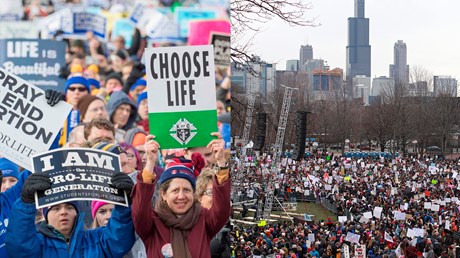 This year, I’ve attended two marches related to causes that matter to me: the March for Life in Washington in January, and the March for Our Lives in Chicago last weekend. They overlapped in many ways—not just in their names. But they differed at key points, too, and not just because one was “conservative” and the other “liberal.”

Caring for the least

For the most part, the people I saw at both of these marches came out because they cared about people who were vulnerable and at risk. I recognize that for some people, the March for Life represents the opposite of this: repression and control over women’s bodies. But I’ll tell you that the people I met over the days when I was in DC were largely for women. At least, they believed they were for women. The message wasn’t about shame, but about caring for babies and their mothers.

Similarly, the March for Our Lives was about vulnerable people. Although that national movement was sparked by the mass school shooting in Florida, the Chicago March for Our Lives was largely about people most affected by gun violence: those who live on the South and West sides of the city. It was truly a group of people gathered to inspire change that would help the people regularly at risk of being shot in Chicago and to show support for them.

I think the difference that sticks out to me most about these two marches (aside from the tone of any signs related to the sitting president) is the matter of practicality. Maybe it was that I attended the local version of the March for Our Lives and the national instance of the March for Life, but I walked away from each with a very different understanding of what I was encouraged to …