Walking Together to Glory

Home » News » Walking Together to Glory

Another evangelical hero and architect of the movement reflects on Graham’s life and legacy. 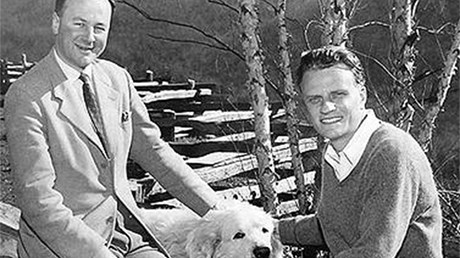 John R. W. Stott first met Billy Graham in the 1940s, while sharing an open-air meeting at Speakers' Corner in London's Hyde Park. Their shared concern for evangelism led to a close association during Graham's 1954 Harringay crusade, which captivated London nightly for nearly three months. Over the next 50 years, the two men's lives would frequently intertwine, through shared leadership in significant ventures like the Lausanne International Congress on World Evangelization and in personal friendship. In 2007, Stott offered these unpublished reminiscences:

Integrity. If I had to choose one word with which to characterize Billy Graham, it would be integrity. He was all of a piece. There was no dichotomy between what he said and what he was. He practiced what he preached.

Finance. When Graham first came to London, a considerable group of church leaders was wondering whether to invite him to preach there. They were critical, but he had anticipated their questions. He was able to say that he received a fixed salary, less than most salaries paid to the senior pastors of large churches, and he received no "love offerings" (unaccounted extras). As for crusade finances, they were published in the press during each crusade.

Sex. Graham was exemplary in his private life. Sometimes he said publicly that he had slept with one woman only, his wife, Ruth. He had no skeletons in any closet.

Harringay. After postponing the close of the Harringay crusade, it went on to last 12 weeks, becoming a remarkable phenomenon. Our church (All Souls, Langham Place) was fully involved, and I went almost every night. Twelve thousand people assembled, night after night, and listened attentively to the message. Each night, I asked …