How the Great Migration changed music in the black church forever. 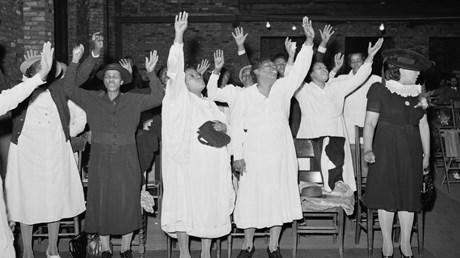 In the 1920s, Chicago’s first African American congregations were at a crossroads. After decades of investment, the churches and their musicians were proud of their accomplishments as they had “lifted the Negro race” to a position of separate but equal status with their white peers in worship. Worship in these churches largely mirrored worship in white churches in song and liturgy. Black Methodist and Baptist congregations often sang from the same hymnals as their white counterparts. Trained singers in the choirs led the less-literate congregants in the proper rendition of hymns. European anthems were prominent in the senior choir’s repertoire. Restraint was the rule in worship.

This was all about to change. As the Great Migration drew thousands of African Americans to the North, many new residents had little interest in the music of these congregations. Instead, they brought their own songs with lyrics that often drew from the hardships of slavery and Jim Crow and rhythms inspired by African chants and medleys. The metered songs of English composer Isaac Watts, which had served as the inspiration for the revival songs of the Great Awakening, were sung without instrumental accompaniment by Southern emigrants seeking worship in smaller storefront churches where more emotion and common language were welcome.

There was the feeling that the more white you acted, the more you would be accepted by white people. There was not that kind of pride about having lived through slavery. … The whole emphasis was ridding every Negro of everything that was Negroid … including the …