Why So Many Christians Sound the Jewish Shofar in Israel

Huckabee is far from the only Christian Zionist to appropriate the ancient ritual horn. 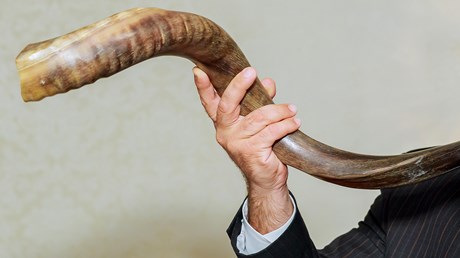 Mike Huckabee, one of several American Christians in Jerusalem for the opening of the US embassy last week, announced that he planned to commemorate the occasion on live TV with a Hebrew greeting and by blowing a shofar.

The shofar, an obscure instrument made of a ram’s horn and traditionally blown during the Jewish High Holidays, has made its way into evangelical hands in recent decades. Some Christian Zionists, Holy Land pilgrims, and even worshipers at charismatic churches in the United States use the curled horn to call out in celebration and identify with the ancient heritage of their faith.

Crowds of evangelicals at pro-Israel parades, conferences, and worship services turn up with Israeli flags, prayer shawls, and their own shofars. More than a dozen options for the spiraled instrument are for sale at online Christian bookstores.

Christian use of the shofar has grown in certain traditions over the past 25 years, along with interest in the Holy Land and dispensationalist understanding of the end times. Believers who incorporate the shofar often echo biblical references to sounding a trumpet, such as its use in warfare by Gideon’s army (Judg. 7:15–22) or the battle of Jericho (Josh. 6), as a call for repentance (Is. 58:1, Hos. 8:1), as a way to gather an assembly (Num. 10:3, Joel 2:15), or for other occasions of praise and proclamation (Psalms and Revelation).

For Christians, blowing the shofar “seems to have an eschatological aspect,” said messianic …