Young Life at the Border

How youth ministries are reaching teens torn between Mexico and the US. 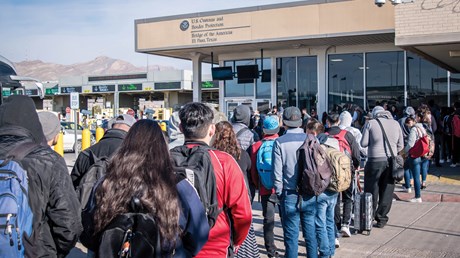 Jocelyn Duran’s mother crossed the US-Mexico border 17 years ago to give birth to her in a hospital in El Paso, Texas, making the baby girl the only American citizen in her family. When she was three years old, Duran moved from her mother’s home in Ciudad Juárez, Mexico, to live with her grandmother in El Paso and begin attending school there.

An American education promised opportunity, an opportunity unlike any her family members had known and one she was expected to make good on. Together, she and her grandmother would turn nothing into something. “You start with zero,” Duran says. “Except this big dream.”

Her grandmother, who is undocumented, worked as domestic help. For a time they lived in whatever home the woman was tending. They struggled financially. Over the years, Duran felt torn between the life she was building in El Paso and the family she could almost see just across the trickling Rio Grande. She watched her grandmother, who felt abandoned, drift into hopelessness and eventually abandon her Protestant faith.

Once they were in an apartment of their own, Duran found her way to a church down the street and began developing what she characterizes as a “real relationship with Jesus.” It developed further when she was a student at Bowie High School, where she got involved in her church’s youth ministry. “If you don’t have Jesus, you’re just out here all alone,” she says.

The high school sits less than half a mile from the Cordova Bridge, one of four bridges connecting El Paso and Juárez. In Duran’s junior year, when her family felt she was old enough to walk over the bridge by herself, she decided to move back to Mexico …